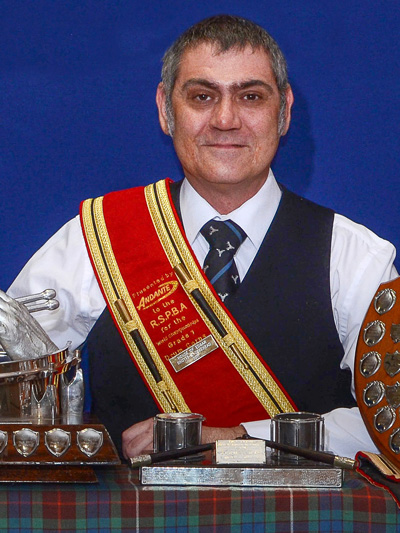 Gordon was born in Whitburn, West Lothian in 1964, and from an early age showed a keen interest in Drumming. His Father, DM Tom Brown, taught him on and off during those early years, but it was in 1976 that he took it up seriously. He joined the Boghall & Bathgate Novice Juvenile Band in November that year, where his dad was already teaching the youngsters and the then Grade 3 Adult Corps. A few months later, in February 1977, at his first attempt, Gordon gained 6th place in the Juvenile Section of the World Solo Drumming Championship. That season, Gordon and the Novice Corps went on to win the Drumming in the five Major Championships. In 1978, the then Grade 3 Adult Band was upgraded to Grade 2 and Gordon became a member of that Drum Corps under the leadership of his dad, Tom. During the seasons of 1978 and 1979, the Grade 2 Drummers gained about every major Championship-Drumming & Band. On the solo side, Gordon steadily moved up the prize lists at the Worlds and other Solo Drumming events, including winning The World Juvenile Solo Drumming titles in 1980 and 1981.
It was during this time that he started to get involved in teaching at his dad’s famous “Tuesday Night Drumming Class” in the Whitburn Burgh Town Hall.

Gordon and the Boghall Band were promoted to Grade 1 Status in 1980 and in their first season, they won the Cowal Drumming Championship. The next three seasons saw them lift a fine hat trick of World Drum Corps Championships; 1981, 82 and 83, as well as every other drumming award. This continued throughout the eighties and included another World Drumming Title in 1986. One of the proudest moments and memories for Gordon and the Boghall Drummers was being the First Drum Corps to win the “Alex Duthart Memorial Trophy” for the Grade 1 Champion of Champions Drum Corps. Searching through old championship tables has also found that from 1981, they would have won that title almost every year up to the introduction of the prize. Boghall’s Novice and Juvenile Corps also won the Title in their respective grades that season.

Gordon started helping out in the early eighties with the Novice and the Juvenile Drum Corps within the Band, enabling them to go on and win numerous Major Drumming awards throughout the eighties and nineties. The most recent wins with the Juvenile Cops were the World Drum Corps Titles in 2009 and 2010, and The British Title 2011.

In 1991, Gordon took over as Leading Drummer of the Grade 1 Corps from his dad and it didn’t take him long to win his first Major Drumming Award as Leading Drummer when the Corps won the European Drumming Title that same year. To date, Gordon has won the Scottish, British, European & Cowal Championships on numerous occasions with both the Corps and Band. The Best Drum Corps at the 2001 & 2012 World Championship and the 2007, 2010 & 2012 Champion of Champions Drum Corps.
Gordon was also named “2012 Drummer of the Year” in the 10th Annual Pipes / Drums Honour’s List.

In 1994, Gordon’s life-long ambition came true when he gained 1st place in the World Solo Drumming Championship. He had made it through to the final on several occasions and was placed 4th in 1993, but to have won such a prestigious award in 1994 was a dream come true. Gordon achieved 1st place again in the 2002 event and a top 6 placing up to retiring from the event in 2013.

Since Gordon became involved in teaching, he is now realising another ambition, by following in his father’s footsteps with this as well. Through his achievements as a teacher, solo player and as leading drummer of the Grade 1 corps, he has carried out workshops and seminars all over the World. Looking to the future, on the teaching side, he would hope that like his dad Tom, he unselfishly continues to pass on what he regards as a Noble Art, especially to youngsters, to make them the Drummers of the future. To date, Gordon has several young players who have advanced through the Novice and Juvenile ranks and achieved Grade1 status.

Gordon is a fully qualified Trainer/Assessor (SVQ D32, C25). He teaches in various schools and is still traveling the World holding workshops and seminars. Gordon and his dad Tom have their own “TG” and “Tom Brown” branded product line and Gordon is also involved in product development with Andante Percussion, Northern Ireland (www.andantedrums.co.uk) and is an endorsee of their Andante Drum Range.

Live at the Royal eBook 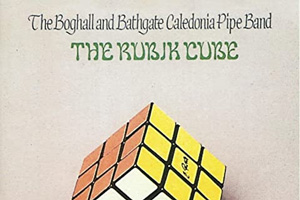 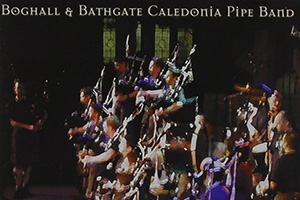