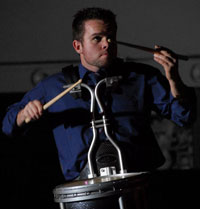 Steven began drumming in 1993 at the age of 10, with initial lessons from his father, Dessie. Steven joined the local Cullybackey Pipe Band in 1994, receiving snare instruction from Adrian Hoy. During his time under Adrian’s instruction Steven won many Juvenile and Junior solo competitions including the Worlds Juvenile section one on two occasions. In 1995 Steven progressed into the snare line where he remained until Cullybackey won the Grade 2 World Drumming title in 2001. It was then that J. Reid Maxwell approached him to join the Simon Fraser University Pipe Band in Vancouver, Canada. Between the years of 2002 – 2008 he travelled from his home in Northern Ireland to compete, teach and perform with the band in British Columbia, Canada.

Some highlights of Steven’s drumming career have been winning the adult section of the World Solo Drumming Championships 10 times (2006, 2011-2019), the Grade 1 World Drum Corps Championships with Inveraray and District in 2017 and the overall World Pipe Band Championships in 2017 & 2019.

If you would be interested in receiving individual lessons (via skype, or in person) from Steven or your band would like to have Steven compose new drum scores then please check out his website at www.stevenmcwhirter.com or contact him directly at info@stevenmcwhirter.com.

Over 6 hours of video lessons for all levels.